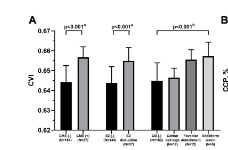 Introduction: Integrated analysis of retinal and choroidal morphologic and vascular features is urgently needed to examine whether and how these two elements interact with each other, thus contributing to visual impairment in patients with idiopathic epiretinal membranes (iERMs). Methods: An observational retrospective study consisting of 181 patients diagnosed with unilateral iERM between August 2019 and July 2022 was carried out at Peking University Third Hospital. All patients underwent a standardized set of ophthalmologic examinations, including EDI-OCT and OCTA scanning, and were subsequently categorized into four stages according to current classification schemes based on their OCT findings. Altogether, 15 qualitative and quantitative parameters of both the retina (full-layer, inner and outer layers) and choroid were identified. Results: The results revealed variations in the choroidal vascularity index (CVI) among different stages of iERMs (p < 0.001) for the first t... 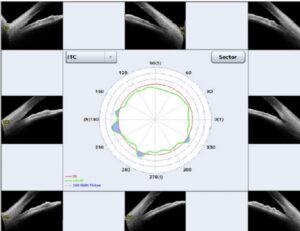 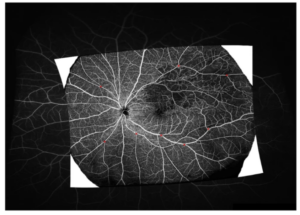 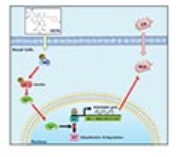 Coronary calcified lesions can exert serious effects on stent expansion. A calcium scoring system, based on optical coherence tomography (OCT), has been previously developed to identify relatively mild calcified lesions that would benefit from plaque modification procedures. Therefore, the present study aimed to establish a novel OCT-based scoring system to predict the stent expansion of moderate and severe calcified lesions. A total of 33 patients who underwent percutaneous coronary intervention (PCI; 34 calcified lesions were observed using coronary angiography) were retrospectively included in the present study. Coronary angiography and OCT images were subsequently reviewed and analyzed. Furthermore, a calcium scoring system was developed based on the results of multivariate analysis before the optimal threshold for the prediction of stent underexpansion in patients with moderate and severe calcified lesions was determined. The mean age of the patients was 67±10 years. The... 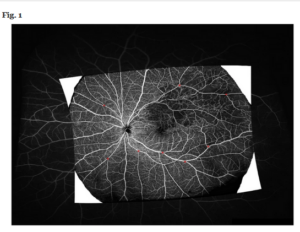 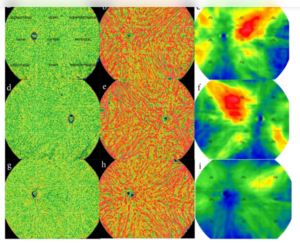 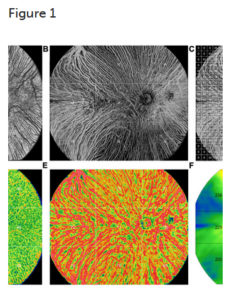 Background: To map and compare the three-dimensional choroidal vascularity index (3D-CVI) in eyes with unilateral central serous chorioretinopathy (CSC), fellow eyes and control eyes using ultra-widefield swept source optical coherence tomography (UWF SS-OCTA). Methods: In this prospective observational study, the 3D-CVIs were measured in 9 subfields or 1 × 1 mm grids by the UWF SS-OCTA with a viewing angle of horizontal 24 × vertical 20 mm. The proportions of vortex vein anastomoses and their corresponding CVI in the central regions were compared among the CSC, fellow and control eyes. Correlations of CVI and vascular density of the large choroidal vessel layer/choriocapillaris layer/choroidal thickness (CT) were also assessed. Results: Thirty-two eyes in 32 patients with unilateral CSC and 32 normal eyes were included in the study. The mean CVI in the eyes with CSC was significantly greater than that in the fellow eyes of CSC and control eyes (41.99 ± 3.56% vs. ... 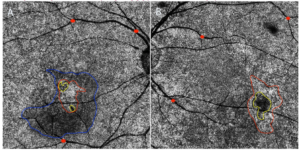 Background: To compare swept-source optical coherence tomography angiography (SS-OCTA) and indocyanine green angiography (ICGA) in patients with central serous chorioretinopathy (CSC). Methods: SS-OCTA and ICGA images of 39 eyes with symptomatic CSC were collected and aligned. Spatial overlap of the annotations of the coarse granulated high reflective area on choriocapillary OCTA and the hyperfluorescence area on mid-phase ICGA was calculated according to the Jaccard index (JI). SS-OCTA findings of fellow eyes and changes in SS-OCTA abnormalities during the follow-up were also analyzed. Results: Three main types of abnormalities in choriocapillaris SS-OCTA images were found: type A, coarse granulated high reflective area (39 eyes [100%]); type B, roundish dark halo around Type A (32 eyes [82.1%]); and type C, coarse granulated low reflective area (39 eyes [100%]). The mean JI of type A on SS-OCTA and the hyperfluorescence area on ICGA were 0.55 ± 0.15 for grader 1 and 0.49 &p... 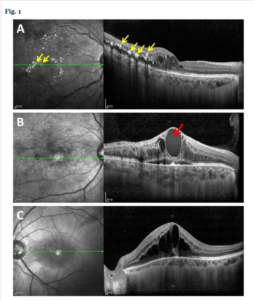 Background: Hyperreflective foci (HRF) features in macular edema associated with different etiologies may indicate the disease pathogenesis and help to choose proper treatment. The goal of this study is to investigate the retinal microstructural features of macular edema (ME) secondary to multiple etiologies with spectral-domain optical coherence tomography (SD-OCT) and analyze the origin of HRF in ME. Methods: This was a retrospective study. SD-OCT images were reviewed to investigate macular microstructural features such as the number and distribution of HRF and hard exudates and the internal reflectivity of the cysts. The differences in microstructural features between groups and the correlations between the number of HRF and other parameters were analyzed. Results: A total of 101 eyes with ME from 86 diabetic (diabetic macular edema, DME) patients, 51 eyes from 51 patients with ME secondary to branch retinal vein occlusion (branch retinal vein occlusion-macular edema, BRVO-ME), 5... 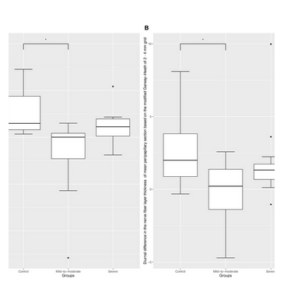 Purpose: To evaluate capillaries perfusion and retinal nerve fiber layer (RNFL) thickness diurnal changes of macular/optic disc regions among participants with or without obstructive sleep apnea-hypopnea (OSA) using spectral-domain optical coherence tomography angiography (OCTA). Methods: In this study, we enrolled a cohort of 35 participants including 14 patients with mild-to-moderate OSA, 12 patients with severe OSA, and 9 healthy individuals. All participants had Berlin questionnaire filled. At 20:00 and 6:30, right before and after the polysomnography examination, a comprehensive ocular examination was conducted. The systemic and ocular clinical characteristics were collected, and OCTA scans were performed repeatedly. Blood flow and RNFL thickness parameters were then exported using built-in software and analyzed accordingly. Results: After sleep, the overall vessel density (VD) variables, especially macular and choriocapillaris VDs, were relatively comparative and stable. One e... 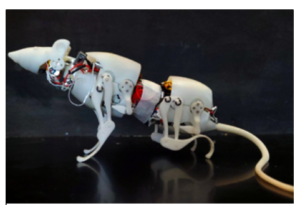 Optical coherence tomography (OCT) is a widely-used modality in clinical imaging, which suffers from the speckle noise inevitably. Deep learning has proven its superior capability in OCT image denoising, while the difficulty of acquiring a large number of well-registered OCT image pairs limits the developments of paired learning methods. To solve this problem, some unpaired learning methods have been proposed, where the denoising networks can be trained with unpaired OCT data. However, majority of them are modified from the cycleGAN framework. These cycleGAN-based methods train at least two generators and two discriminators, while only one generator is needed for the inference. The dual-generator and dual-discriminator structures of cycleGAN-based methods demand a large amount of computing resource, which may be redundant for OCT denoising tasks. In this work, we propose a novel triplet cross-fusion learning (TCFL) strategy for unpaired OCT image denoising. The model complexity of o... 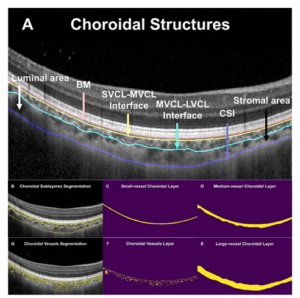 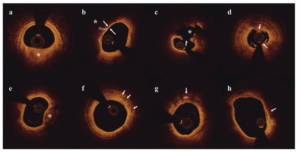 Aims: Culprit-plaque morphology [plaque rupture (PR) and plaque erosion (PE)] and high-risk plaques (HRP) identified by optical coherence tomography (OCT) and residual SYNTAX score (rSS) have been reported to influence clinical outcomes. Thus, in this study, we aimed to investigate the prognostic implication of culprit-plaque morphology and rSS for major adverse cardiovascular events (MACE) in patients with ST-segment elevation myocardial infarction (STEMI). Methods: Based on plaque morphology and rSS, 274 STEMI patients were divided into 4 groups: PE/low-rSS (n=61), PE/high-rSS (n=58), PR/low-rSS (n=55), and PR/high-rSS (n=100). According to HRP and rSS, patients were stratified to non-HRP/low-rSS (n=97), non-HRP/high-rSS (n=109), HRP/low-rSS (n=19), and HRP/high-rSS (n=49). MACE was defined as the composite of all-cause death, recurrence of myocardial infarction, stroke, and unplanned revascularization of any coronary artery. Results: During the follow-up of 2.2 years, 47 (17.2%) ... 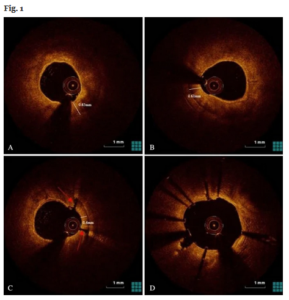 Background: To compare the effect and outcomes of optical coherence tomography (OCT)-guided rotational atherectomy (RA) with intravascular ultrasound (IVUS)-guided RA in the treatment of calcified coronary lesions. Methods: Data of calcified coronary lesions treated with RA that underwent OCT-guided or IVUS-guided from January 2016 to December 2019 at a single-center registry were retrospectively analyzed. The effect and outcomes between underwent OCT-guided RA and IVUS-guided RA were compared. Results: A total of 33 lesions in 32 patients received OCT-guided RA and 51 lesions in 47 patients received IVUS-guided RA. There was no significant difference between OCT-guided RA group and IVUS-guided RA group in clinical baselines characteristics. Comparing the procedural and lesions characteristics of the two groups, the contrast volume was larger [(348.8 ± 110.6) ml vs. (275.2 ± 76.8) ml, P = 0.002] and the scoring balloon was more frequently performed (33.3% vs. 3.9%, P =...
1 - 15 of 70 // 1 2 3 … 5 Next