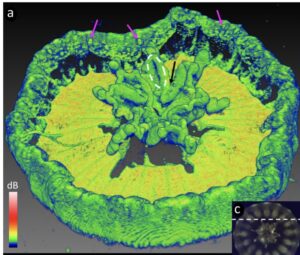 The jellyfish Cassiopea largely cover their organic carbon demand via photosynthates produced by their microalgal endosymbionts, but how holobiont morphology and optical properties affect the light microclimate and symbiont photosynthesis in Cassiopea remain unexplored. Here, we use optical coherence tomography (OCT) to study the morphology of live Cassiopea medusae at high spatial resolution. We include detailed 3D reconstructions of external micromorphology, and show the spatial distribution of endosymbionts clustered in amoebocytes and white granules in the bell tissue. Furthermore, we use OCT data to extract inherent optical properties from light scattering white granules in Cassiopea and show that white granules enhance local light availability for symbionts in close proximity. Individual granules had a scattering coefficient of μs = 200-300 cm-1, and a scattering anisotropy factor of g = 0.7, while large tissue regions filled with white granules had a lower μs = 40-100 cm-1, a... 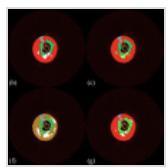 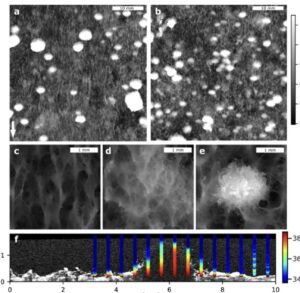 Phototrophic biofilms form complex spatial patterns in streams and rivers, yet, how community patchiness, structure and function are coupled and contribute to larger-scale metabolism remains unkown. Here, we combined optical coherence tomography with automated O 2 microprofiling and amplicon sequencing in a flume experiment to show how distinct community patches interact with the hydraulic environment and how this affects the internal distribution of oxygen. We used numerical simulations to derive rates of community photosynthetic activity and respiration at the patch scale and use the obtained parameter to upscale from individual patches to the larger biofilm landscape. Our biofilm landscape approach revealed evidence of parallels in the structure-function coupling between phototrophic biofilms and their streambed habitat. ( Read Full Article ) 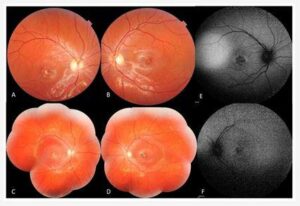 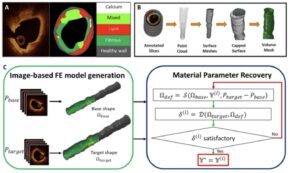 The increasing prevalence of finite element (FE) simulations in the study of atherosclerosis has spawned numerous inverse FE methods for the mechanical characterization of diseased tissue in vivo. Current approaches are however limited to either homogenized or simplified material representations. This paper presents a novel method to account for tissue heterogeneity and material nonlinearity in the recovery of constitutive behavior using imaging data acquired at differing intravascular pressures by incorporating interfaces between various intra-plaque tissue types into the objective function definition. Method verification was performed in silico by recovering assigned material parameters from a pair of vessel geometries: one derived from coronary optical coherence tomography (OCT); one generated from in silico-based simulation. In repeated tests, the method consistently recovered 4 linear elastic (0.1 ± 0.1% error) and 8 nonlinear hyperelastic (3.3 &plus... 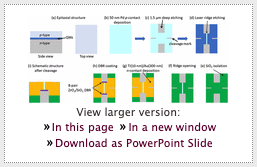 We report broad bandwidth blue superluminescent light-emitting diodes (SLEDs) based on a short-cavity active region. The dependencies of amplified spontaneous emission (ASE) output power and gain bandwidth on cavity length were investigated in devices whose gain medium consists of a ridge waveguide with embedded InGaN/GaN quantum wells sandwiched between one etched facet coated with a high reflectivity distributed Bragg mirror and one cleaved facet with an anti-reflection coating. 250 μm-long blue SLEDs exhibit a spectral bandwidth up to 7.5 nm at 1.72 mW output power at a wavelength of 427 nm. As cavity length decreases, the bandwidth gradually broadens up to 15 nm for the shortest, 40 μm-long, SLED devices. ASE is confirmed by current-dependent electroluminescence spectra and polarization-dependent emission intensity measurements. The optical features of those short-cavity devices could be helpful for designing broad bandwidth SLEDs aiming for various applications such as op...

Extended-focus optical coherence tomography (xf-OCT) is a variant of optical coherence tomography (OCT) wherein the illumination and/or detection modes are engineered to provide a constant diffractionless lateral resolution over an extended depth of field (typically 3 to 10 × 10× the Rayleigh range). xf-OCT systems operating at 800 nm have been devised and used in the past to image brain structures at high-resolution in vivo , but are limited to ∼ 500    μm ∼500  μm in penetration depth due to their short illumination wavelength. Here we present an xf-OCT system optimized to an image deeper within the cortex by using a longer illumination central wavelength of 1310 nm. The system offers a lateral resolution of 3 and 6.5 μm, over a depth of 900 μm and > 1.5    mm >1.5  mm using a 10 × 10× and 5 × 5× objective, respectively, in air. We characterize the system’s r... 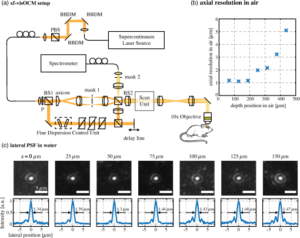 Visible light optical coherence tomography has shown great interest in recent years for spectroscopic and high-resolution retinal and cerebral imaging. Here, we present an extended-focus optical coherence microscopy system operating from the visible to the near-infrared wavelength range for high axial and lateral resolution imaging of cortical structures in vivo . The system exploits an ultrabroad illumination spectrum centered in the visible wavelength range (λ c   =  650  nm, Δλ  ∼  250  nm) offering a submicron axial resolution (∼0.85  μm in water) and an extended-focus configuration providing a high lateral resolution of ∼1.4  μm maintained over ∼150  μm in depth in water. The system’s axial and lateral resolution are first characterized using phantoms, and its imaging performance is then demonstrated by ...

Optical coherence microscopy (OCM) is an interferometric technique providing 3D images of biological samples with micrometric resolution and penetration depth of several hundreds of micrometers. OCM differs from optical coherence tomography (OCT) in that it uses a high numerical aperture (NA) objective to achieve high lateral resolution. However, the high NA also reduces the depth-of-field (DOF), scaling with 1/NA 2 . Interferometric synthetic aperture microscopy (ISAM) is a computed imaging technique providing a solution to this trade-off between resolution and DOF. An alternative hardware method to achieve an extended DOF is to use a non-Gaussian illumination. Extended focus OCM (xfOCM) uses a Bessel beam to obtain a narrow and extended illumination volume. xfOCM detects back-scattered light using a Gaussian mode in order to maintain good sensitivity. However, the Gaussian detection mode limits the DOF. In this work, we present extended ISAM (xISAM), a method combining the benefit... 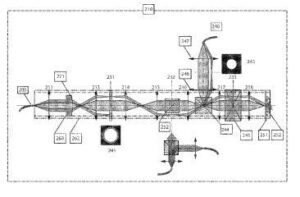 The invention relates to an optical coherence microscopy system for fast, phase resolved imaging by means of optical coherence microscopy with decoupled illumination and detection apertures, producing a dark-field effect with an enhanced optical contrast. The setup uses a light source with an appropriate temporal coherence, an interferometer and an array detector combined with a spectrometer. The dark-field effect is produced by optical filter means in the illumination and detection paths, positioned in conjugated planes of the sample microscope objective. These optical means comprise for example refractive or diffractive elements, amplitude or phase masks, or programmable spatial light modulators. The object is scanned via a scanning unit allowing a point scan of the object. ( Read Full Article )

We present an application of massively parallel processing of quantitative flow measurements data acquired using spectral optical coherence microscopy (SOCM). The need for massive signal processing of these particular datasets have been a major hurdle for many applications based on SOCM. In view of this difficulty, we implemented and adapted quantitative total flow estimation algorithms on graphics processing units (GPU) and achieved a 150 fold reduction in processing time when compared to a former CPU implementation. As SOCM constitutes the microscopy counterpart to spectral optical coherence tomography (SOCT), the developed processing procedure can be applied to both imaging modalities. We present the developed DLL library integrated in MATLAB (with an example) and have included the source code for adaptations and future improvements. ( Read Full Article )

We propose a new method and optical instrumentation for mouse brain imaging based on extended-focus optical coherence microscopy. This in vivo imaging technique allows the evaluation of the cytoarchitecture at cellular level and the circulation system dynamics in three dimensions. This minimally invasive and non-contact approach is performed without the application of contrasting agents. The optical design achieved a resolution of 2.2 μm over a distance of 800 μm, which was sufficient to obtain a detailed three-dimensional image of a wild-type mouse’s brain down to the layer III of the cortex. Intrinsically contrasted microvessels and structures similar to the bodies of neurons were distinguishable. ( Read Full Article ) 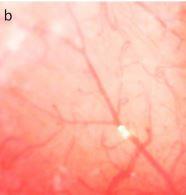 We used Optical Coherence Microscopy (OCM) to monitor structural and functional changes due to ischemic stroke in small animals brains in vivo. To obtain lateral resolution of 2.2 μm over the range of 600 μm we used extended focus configuration of OCM instrument involving Bessel beam. It provided access to detailed 3D information about the changes in brain vascular system up to the level of capillaries across I and II/III layers of neocortex. We used photothrombotic stroke model involving photoactive application of rose bengal to assure minimal invasiveness of the procedure and precise localization of the clot distribution center. We present the comparative analysis involving structural and angiographic maps of the stroke-affected brain enabling in-depth insight to the process of development of the disorder. ( Read Full Article )

Optical coherence correlation spectroscopy (OCCS) allows studying kinetic processes at the single particle level using the backscattered light of nanoparticles. We extend the possibilities of this technique by increasing its signal-to-noise ratio by a factor of more than 25 and by generalizing the method to solutions containing multiple nanoparticle species. We applied these improvements by measuring protein adsorption and formation of a protein monolayer on superparamagnetic iron oxide nanoparticles under physiological conditions. ( Read Full Article )
1 - 15 of 35 // 1 2 3 Next