The multimodal data analysis tools developed by DIAGNOS take advantage of the most recent advancements in ophthalmic science. Combining data fetched from retinal images and optical coherence tomography (OCT) scans, DIAGNOS uses the most accurate technologies that exist for retinal diagnostics. The technology is more precise than MRI and ultrasound scanning, it is non-invasive, and integrates the analysis of 3D cross-sectional images of the retina” ( Read Full Article ) 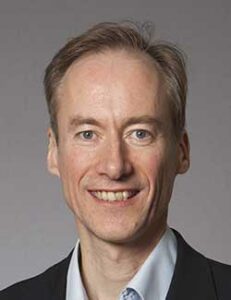 Every year, I am amazed and impressed by the number and variety of presentations at conferences in the field of biophotonics . We are blessed by the seemingly endless ways to manipulate and measure light, relatively inexpensively, in our pursuit of powerful new ways to understand, diagnose and treat disease. Much human ingenuity has been applied to overcoming difficult technical problems and pushing back the bounds of our knowledge. But then I usually pause for reflection: How much of this advanced technology and research ends up in practical, routine use by clinicians caring for their patients? Of course, there are some big successes. In my own field of optical coherence tomography (OCT), imaging the eye is the poster child success of biophotonics, with thousands of OCT devices installed and an annual market size measured in the hundreds of millions of dollars. Then there’s the humble optical endoscope, which is relied upon by surgeons in many medical fields, as well as sever...

Background A clear distinction between actinic keratosis (AK), Bowen's disease (BD) and squamous cell carcinoma (SCC) cannot reliably be made by clinical and dermoscopic evaluation alone. Dynamic optical coherence tomography (D-OCT) is a novel angiographic variant of OCT that allows for non-invasive, in vivo evaluation of the cutaneous microvascular morphology. Objective To investigate the microvascular structures of AK, BD and invasive SCC using D-OCT in order to gain insights into the microvascular morphology of lesions in the spectrum of keratinocyte skin cancers. Methods 47 patients with a total of 54 lesions (18 AK, 12 BD and 24 SCC) were included in the study. D-OCT still-images of AK, BD, SCC at three predefined skin depths were prepared and randomized, creating a study set of 162 D-OCT images. Three observers performed blinded evaluations of the randomized study-set assessing multiple parameters including the different types of vascular morphology. Non-blinded quantitative m... 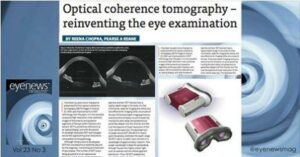 It has been 25 years since Huang et al. presented the first optical coherence tomography (OCT) images in Science. With vast improvements in OCT technology over the years, it is now possible to acquire high-resolution cross-sectional images of the anterior and posterior segments of the eye within fractions of a second. OCT is sometimes referred to as an ‘optical biopsy’, and with the advent of ultrahigh resolution OCT technologies we are fast approaching axial resolutions comparable to histopathology. Although initially slow to be adopted, OCT has now become an essential adjunct for the diagnosis, monitoring and treatment of eye disease. The number of OCT scans being acquired is on an exponential trajectory, partly owing to the emergence of intravitreal therapies for the treatment of retinal diseases – OCT has become the default modality for assessing efficacy of treatment. In addition to eye specialists ordering more OCT examinations, they are routinely imaging both eyes – micromete...

Basal cell carcinoma (BCC) is the most commonly diagnosed cancer and the most common skin cancer in the world 1-5 . Despite increased insight on skin cancer risk factors, including excessive sun exposure and indoor tanning, the incidence of skin cancer continues to rise worldwide, particularly in younger populations 6 . In a recent study, it was estimated that more than four million cases are diagnosed annually in the United States alone 6 . Given the widespread prevalence of this disease, there is a substantial impact on overall patient morbidity and quality of life 7-9 . Similarly, medical treatment for skin cancer accounts for a considerable amount of healthcare expenditures and is often a large financial burden to patients and their families. As such, improved screening and treatment options are imperative to reduce the cost and to refine the outcome of this rising problem. ( Read Full Article ) 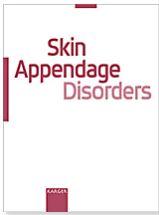 Background: Nail psoriasis is a painful and disfiguring nail disease that often leads to invasive biopsies. Dermoscopy of the hyponychium can be useful in the diagnosis showing twisted coiled vessels. Structural features of nail psoriasis have been described with optical coherence tomography (OCT). Objectives: To investigate vascular features of nail psoriasis using dynamic OCT. Methods: This was an observational, prospective, controlled study in which psoriasis patients with psoriatic nail changes and healthy control patients underwent OCT imaging of the distal nail plate and proximal nail fold. Vertical and horizontal OCT images were analyzed to describe structural and vascular features and to quantify blood flow at depth. Results: Sixteen psoriatic nails and 16 control nails were included. Psoriatic nails had significantly increased blood flow in the proximal nail fold at depths of 0.72 mm (p = 0.035) and 0.76 mm (p = 0.027). Nail thickness was significantly greater in psoriatic ...

Skin cancer is the most common malignancy worldwide, and non-melanoma skin cancers (NMSC) in particular, including basal cell carcinomas (BCC) and squamous cell carcinomas, constitute around 80 percent of all skin cancers. It is estimated that approximately 3.5 million new cases of NMSC occur every year in the U.S., exceeding that of all other cancers combined. Despite the high prevalence of NMSC, they can be effectively treated and cured with low recurrence when detected at an early stage. BCCs are known to be slow growing and rarely metastasize to other parts of the body; however, if left untreated, they can cause extensive local tissue invasion and destruction. skin cancer. skin ca... Image Tools The US Preventive Services Task Force recently has updated their recommendations for routine full-body skin checks for skin cancer screening and concluded there is insufficient evidence for routine screening in those without pre-existing risk factors (such as a personal history of skin c... 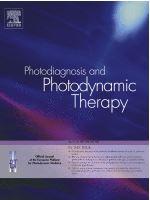 Background Early diagnosis of non-melanoma skin cancer (NMSC) is potentially possible using optical coherence tomography (OCT) which provides non-invasive, real-time images of skin with micrometre resolution and an imaging depth of up to 2 mm. OCT technology for skin imaging has undergone significant developments, improving image quality substantially. The diagnostic accuracy of any method is influenced by continuous technological development making it necessary to regularly re-evaluate methods. Objective The objective of this study is to estimate the diagnostic accuracy of OCT in basal cell carcinomas (BCC) and actinic keratosis (AK) as well as differentiating these lesions from normal skin. Methods A study set consisting of 142 OCT images meeting selection criterea for image quality and diagnosis of AK, BCC and normal skin was presented uniformly to two groups of blinded observers: 5 dermatologists experienced in OCT-image interpretation and 5 dermatologists with no experience in ... 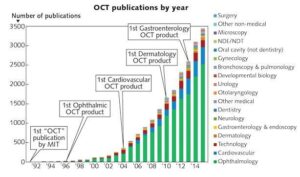 The optical coherence tomography (OCT) industry has grown dramatically in its first 25 years, and while the positive effects on patient clinical care are the most important measure of OCT's success, its contributions to the economy in jobs, tax receipts, and healthcare savings are also noteworthy. The field of optical coherence tomography (OCT) has grown dramatically since its discovery in the early 1990s. The commercialization and growth of OCT, which has occurred over the past 25 years, has been highly impactful scientifically, clinically, and economically. Many factors have helped drive this success, starting with the clinical need for new cost-effective, high-resolution, minimally invasive imaging solutions for various diagnostic and therapeutic applications. But equally important to this success has been the worldwide ecosystem consisting of the intertwined role of scientists, engineers, clinicians, professional societies, government agencies, government funding, regulatory bod...

Stratum corneum and epidermal layers change in terms of thickness and roughness with gender, age and anatomical site. Knowledge of the mechanical and tribological properties of skin associated with these structural changes are needed to aid in the design of exoskeletons, prostheses, orthotics, body mounted sensors used for kinematics measurements and in optimum use of wearable on-body devices. In this case study, optical coherence tomography (OCT) and digital image correlation (DIC) were combined to determine skin surface strain and sub-surface deformation behaviour of the volar forearm due to natural tissue stretching. The thickness of the epidermis together with geometry changes of the dermal-epidermal junction boundary were calculated during change in the arm angle, from flexion (90°) to full extension (180°). This posture change caused an increase in skin surface Lagrange strain, typically by 25% which induced considerable morphological changes in the upper skin layers e... 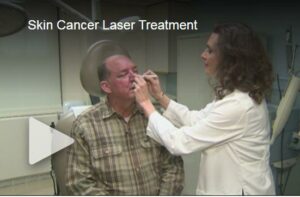 Basal Cell Carcinoma is the most common form of skin cancer in the United States, with more than four million cases are diagnosed every year. Until now, surgery has been the standard treatment, but a new non-invasive option is helping cancer patients get rid of the disease. Will Leggett had basal cell carcinoma which his doctor was able to diagnose and treat using the new technique. Legett was scheduled for an invasive forehead flap surgery until he got a second opinion from Dr. Orit Markowitz at Mount Sinai Hospital in New York. “[Dr. Markowitz] said, ‘I think I can do this without you having to go under the knife’ to have it removed’,” Legett said. “And of course, we were just blown away.” Markowitz was able to save Leggett’s nose using a non-invasive laser treatment called optical coherence tomography. It’s similar to ultrasound, but uses infra-red light to provide even clearer and deeper images. “With non-invasive imagi...

Validation of Dynamic optical coherence tomography for non-invasive, in vivo microcirculation imaging of the skin

Objectives Dynamic optical coherence tomography (D-OCT) is anangiographic variation of OCT that non-invasively provides images of the in vivo microvasculature of the skin by combining conventional OCT images with flow data. The objective of this study was to investigate and report on the D-OCT technique for imaging of the vascular networks in skin as well as to validate the method by comparing the results against already accepted blood flow measuring tools. Methods 35 healthy subjects were recruited for the multicentre study, consisting of three experiments set up to examine the vascular blood perfusion during different induced physiologic changes in the blood flow. In order to validate the D-OCT images against existing techniques for blood flow measuring we performed consecutive D-OCT, chromametry and laser speckle contrast imager (LSCI) measurements on identical skin sites in all of the experiments. Blinded observer evaluations were performed in order to evaluate the vascular morp... 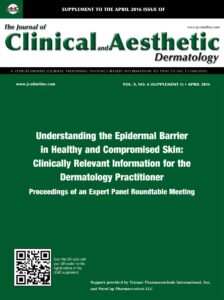 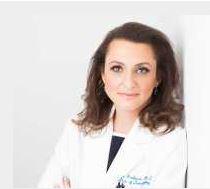 The annual incidence of skin cancer is more than breast, colon, lung, and prostate cancer combined. Of the 7 most common skin cancers in the US melanoma is the only one whose incidence is increasing. The highest risk group for skin cancer are fair skin, adults with a history of sun exposure. ( Read Full Article ) 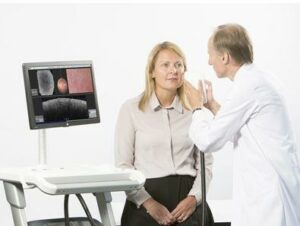 Researchers in New York have shown that a variation of optical coherence tomography (OCT) is able to tell melanomas apart from other skin lesions, by imaging the patterns of blood vessels that surround them. The small, early-stage study suggests that speckle-variance (sv) OCT could become a useful clinical tool for quickly identifying the most dangerous form of skin cancer, although a larger clinical trial of the technique will be needed to prove its utility first. Writing in the open access journal Dermatology Online , Orit Markowitz and colleagues looked at two pairs of malignant and benign lesions that are typically difficult to differentiate: a basal cell carcinoma versus a sebaceous hyperplasia; and a melanoma-in-situ versus pigmented actinic keratosis. They found that the blood vessels feeding the melanoma were thin and irregular, spanning its entire en face field. In contrast, the benign sebaceous hyperplasia showed well-organized, thick and regular vessels. The pigmented act...
1 - 15 of 201 // 1 2 3 … 14 Next