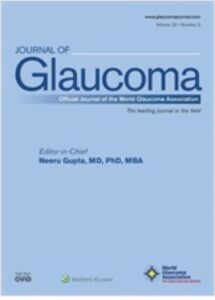 Retina and choroid without secrets 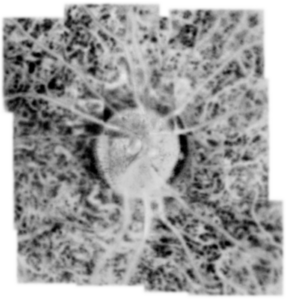 A team of scientists in Poland has achieved another milestone in eye imaging, developing a technique that enables visualization of the retina and choroid at discrete depths. Today’s imaging of eye tissues would not be possible without the use of optical coherence tomography (OCT) scans, which are one of the most popular and accurate diagnostic techniques. This technology enables ophthalmologists to understand more fully the mechanisms of many diseases of the eye and to select therapies more effectively. However, OCT is not a perfect technique. Coherent noise and/or limited axial range have prevented high-resolution imaging, as well as precluding full penetration of all layers of the retina and choroid. According to an Institute of Physical Chemistry of the Polish Academy of Sciences (IPCPAS) news release, researchers at the International Centre for Translational Eye Research (ICTER) found a way around these limitations and developed spatio-temporal optical coherence tomography (... 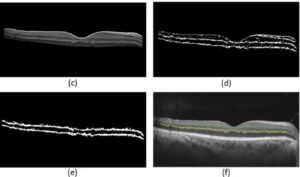 Quantifying the smoothness of different layers of the retina can potentially be an important and practical biomarker in various pathologic conditions like diabetic retinopathy. The purpose of this study is to develop an automated machine learning algorithm which uses support vector regression method with wavelet kernel and automatically segments two hyperreflective retinal layers (inner plexiform layer (IPL) and outer plexiform layer (OPL)) in 50 optical coherence tomography (OCT) slabs and calculates the smoothness index (SI). The Bland–Altman plots, mean absolute error, root mean square error and signed error calculations revealed a modest discrepancy between the manual approach, used as the ground truth, and the corresponding automated segmentation of IPL/ OPL, as well as SI measurements in OCT slabs. It was concluded that the constructed algorithm may be employed as a reliable, rapid and convenient approach for segmenting IPL/OPL and calculating SI in the appropriate layers. 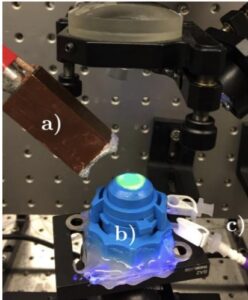 Collagen crosslinking of the cornea (CXL) is commonly employed to prevent or treat keratoconus. Although the global change of stiffness before and after treatment can be monitored with OCE, the depth dependence of this change is still unclear. Here we propose to combine phase-decorrelation measurement applied to OCT structural images and acoustic micro-tapping optical coherence elastography (AμT-OCE) to explore possible reconstruction of stiffness with depth within crosslinked corneas in an ex vivo human cornea sample. The analysis of experimental OCT images allows to define the penetration depth of CXL into the cornea which varies from ∼100μm in the periphery to ∼150μm in the central area and demonstrates a sharp transition between the areas. This information was used in numerical simulations of the mechanical guided wave propagation in the two-layer medium with different elastic moduli corresponding to that for the CXL and normal corneas. The simulation supports our hypothesis tha... 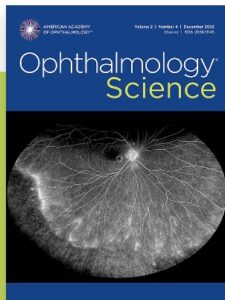 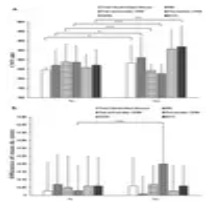 We compared axial length (AL) measurements using spectral-domain optical coherence tomography (SD-OCT)-based and partial coherence interferometry (PCI)-based biometry in eyes with various chorioretinal diseases. Medical records were retrospectively analyzed in 123 eyes from 73 patients who underwent AL measurements using SD-OCT and PCI. AL values were highly consistent by both measurements (ICC = 0.996 in SD-OCT and 0.995 in PCI-based biometry). The mean difference in AL between the two instruments was − 0.09 ± 0.17 mm, which was significant (P < 0.001). There was a strong correlation between the measurements obtained using the two instruments (r = 0.982, P < 0.001). The 95% limits of agreement were − 0.43 to 0.25 mm, and the agreement of AL in the Bland–Altman analysis showed a difference. The difference in measurements was not associated with the difference in central retinal thickness (r = 0.033, P = 0.720). However, the presence of an epiretinal membrane affected the diffe... 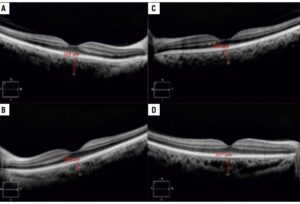 Objective: The present study aims to assess the difference in choroidal and macular thickness in type 2 diabetes (T2D) patients with and without diabetic retinopathy (DR). Materials and methods: This cross-sectional analytic study included 84 eyes from 56 subjects by consecutive sampling which were divided into control, T2D without DR/non-diabetic retinopathy (NDR), and T2D with DR/ diabetic retinopathy (DR) group. The subjects were patients with T2D aged 40–60 years with or without DR, with normal intraocular pressure, and never received any DR therapy. The data collected were age, gender, mean arterial pressure, glycemic control, choroidal thickness (CT), and macular thickness (MT). Results: Mean age of the NDR group was 51.67 ± 4.64 years, the DR group was 52.45 ± 4.46 years, and the control group was 51.31 ± 5.72 years. Subjects in DR group (247.57 ± 57.95 microns) had significantly thinner choroids when compared to the NDR group (266.68 ± 51.76 microns), they both also had sign... 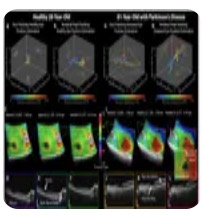 During the COVID-19 pandemic, an emphasis was placed on contactless, physical distancing and improved telehealth; contrariwise, standard-of-care ophthalmic imaging of patients required present, trained personnel. Here, we introduce contactless, autonomous robotic alignment of optical coherence tomography (RAOCT) for in vivo imaging of retinal disease and compare measured retinal thickness and diagnostic readability to technician operated clinical OCT. In a powered study, we found no statistically significant difference in retinal thickness in both healthy and diseased retinas (p > 0.7) or across a variety of demographics (gender, race, and age) between RAOCT and clinical OCT. In a secondary study, a retina specialist labeled a given volume as normal/abnormal. Compared to the clinical diagnostic label, sensitivity/specificity for RAOCT were equal or improved over clinical OCT. Contactless, autonomous RAOCT, that improves upon current clinical OCT, could play a role in both ophthal... 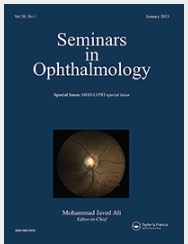 A systematic review of OCT and OCT angiography in retinal vasculitis

Background Retinal vasculitis is a component of uveitis for which the Standardisation of Uveitis Nomenclature (SUN) working group has no standard diagnostic criteria or severity grading. Fluorescein angiography is the gold standard test to assess retinal vasculitis, but is invasive and time-consuming. Optical coherence tomography (OCT) provides non-invasive detailed imaging of retinal structures and abnormalities, including blood vessel architecture and flow with OCT angiography (OCT-A). However, use of OCT in retinal vasculitis beyond assessing macular oedema, is not well established. We conducted a systematic review to understand the features of retinal vasculitis in OCT, Enhanced-depth imaging OCT (OCT-EDI) and OCT-A imaging. Methods The systematic search was done in March 2022 and updated in January 2023, through PubMed, EMBASE and the Web of Science database for studies related to OCT, OCT-EDI and OCT-A findings and retinal vasculitis. Bias assessment was assessed using JB... 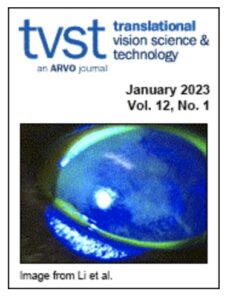 Purpose: This study was designed to apply deep learning models in retinal disease screening and lesion detection based on optical coherence tomography (OCT) images. Methods: We collected 37,138 OCT images from 775 patients and labelled by ophthalmologists. Multiple deep learning models including ResNet50 and YOLOv3 were developed to identify the types and locations of diseases or lesions based on the images. Results: The model were evaluated using patient-based independent holdout set. For binary classification of OCT images with or without lesions, the performance accuracy was 98.5%, sensitivity was 98.7%, specificity was 98.4%, and the F1 score was 97.7%. For multiclass multilabel disease classification, the models was able to detect vitreomacular traction syndrome and age-related macular degeneration both with an accuracy of more than 99%, sensitivity of more than 98%, specificity of more than 98%, and an F1 score of more than 97%. For lesion location detection, the recalls... 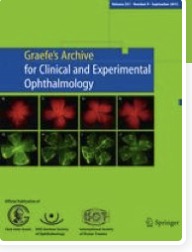 Purpose To investigate the prevalence and clinical characteristics of diabetic patients with retinal venous loops (RVLs) and to assess the association with retinal ischemia using widefield swept-source optical coherence tomography angiography (WF SS-OCTA). Methods In this retrospective, cross-sectional study, a total of 195 eyes of 132 diabetic patients (31 eyes with no diabetic retinopathy (DR), 76 eyes with nonproliferative DR (NPDR), and 88 eyes with proliferative DR (PDR)) were imaged with WF SS-OCTA using Angio 6 × 6 mm and Montage 15 × 15 mm scans. Quantitative ischemia-related parameters, including ischemia index (ratio of nonperfusion area to total retinal area), foveal avascular zone (FAZ), and neovascularization features, were evaluated. RVLs were classified as type I or type II according to the branching level of the feeder vessel. A multivariate generalized estimating equations (GEE) logistic regression model was used to analyze the association of systemic parameter... 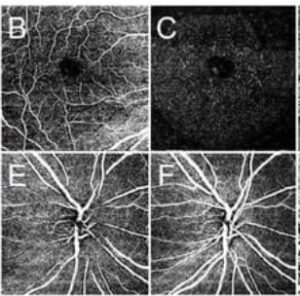 im of the study: To report optical coherence tomography angiography (OCTA) findings in patients affected by CRB1-associated retinal dystrophies. Method: Patients affected by a genetically confirmed CRB1-associated retinal dystrophy were prospectively enrolled in an observational study, along with age- and sex-matched healthy volunteers as control subjects. All study and control subjects received a complete ophthalmic examination and multimodal retinal imaging, including OCTA. Result: A total of 12 eyes from 6 patients were included in the study. The mean BCVA of patients was 0.42 ± 0.25 logMAR. Two patients showed large central atrophy, with corresponding definite hypo-autofluorescence on fundus autofluorescence (FAF). Another four patients disclosed different degrees of RPE mottling, with uneven FAF. On OCTA, the macular deep capillary plexus and choriocapillaris had a lower vessel density in eyes affected by CRB1-associated retinopathy when compared to healthy controls. On the o...
31 - 45 of 17763 // Prev 1 2 3 4 5 … 1,185 Next