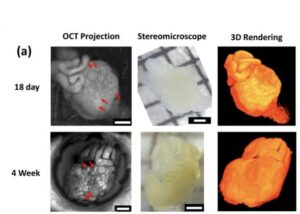 Ovarian tissue cryopreservation has been successfully applied worldwide for fertility preservation. Correctly selecting the ovarian tissue with high follicle loading for freezing and reimplantation increases the likelihood of restoring ovarian function, but it is a challenging process. In this work, we explore the use of three-dimensional spectral-domain optical coherence tomography (SD-OCT) to identify different follicular stages, especially primary follicles, compare the identifications with H&E images, and measure the size and age-related follicular density distribution differences in mice ovaries. We use the thickness of the layers of granulosa cells to differentiate primordial and primary follicles from secondary follicles. The measured dimensions and age-related follicular distribution agree well with histological images and physiological aging. Finally, we apply attenuation coefficient map analyses to significantly improve the image contrast and the contrast-to-noise ra... 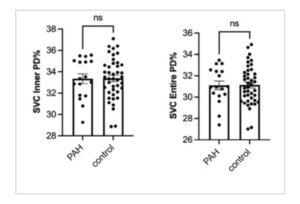 Objective Hypertensive disorders are a common complication in pregnancy, occurring in 6-8% of U.S pregnancies, and often present with a prodrome of ocular manifestations. Optical Coherence Tomography Angiography (OCTA) is a technique for imaging the retina in cross section. As perfusion in the eye decreases, such as in hypertensive disorders, vessels increase in length in order to maintain perfusion in the area. We sought to identify if these subclinical ocular changes on OCTA could predict pregnancy associated hypertension (PAH). Study Design This is a retrospective cohort study of a prospective analysis of pregnant subjects undergoing OCTA after recruitment from a Fetal Diagnostic Unit at a large academic institution between February 2018 and December 2021. Study participants were in the third trimester with a singleton fetus and were categorized as healthy controls with no prior medical history or those who developed PAH. The PAH group was defined as those who developed gesta... 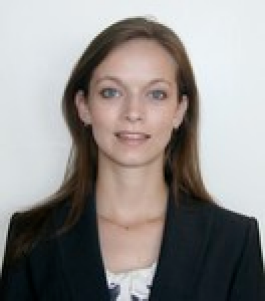 University of Oklahoma received a 2023 NIH Grant for $162,748 for Use of 3D Quantitative Optical Methods to Optimize Mebendazole Treatment of Ovarian Cancer.  The principal investigator is Lauren Elizabeth Dockery.  Below is a summary of the proposed study. Effective treatment for recurrent epithelial ovarian cancer is a major, unmet public health need as the response rates of the patients are often low with the traditional chemotherapy. Repurposing drugs is an increasingly popular strategy in oncology due to the financial and logistical constraints of new drug development. Recently, anti-parasitic drugs such as mebendazole have surfaced as repurposed oncology drugs and showed promise in treating multiple types of tumors. The anti-parasitic drugs, fenbendazole and mebendazole, are in the benzimidazole class and have been FDA-approved to treat pinworm and other helminthic infections in humans and animals for decades. The selectivity of these drugs for the parasite rather than the ... 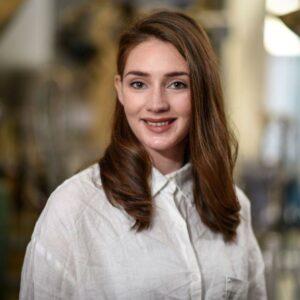 Baylor College of Medicine Received a 2022 NIH Grant for $67,582 for In vivo investigation of fallopian tube transport. The principal investigator is Dierdre Scully. Below is a summary of the proposed study.   The overall objective of this study is to investigate the role of cilia in the fallopian tube (oviduct) in vivo. To accomplish this, my lab has developed a highly innovative, high resolution volumetric optical imaging method that provides unprecendented 4D resolution of the oviduct in its native state. Cilia are traditionally considered to generate the driving force required for oocyte/embryo transport, a theory reinforced by ciliopathy-associated infertility. While there are studies that identify muscular contractions as the predominant factor for transport, recent research conducted in mouse models with weakened ciliary beating demonstrated incomplete transport of ovulated oocytes, and as a result, the current consensus surrounding the control of tubal transport is divi... 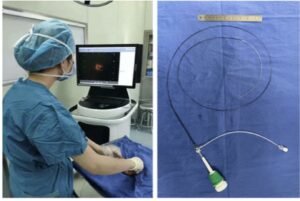 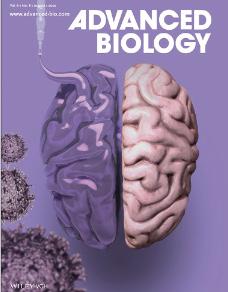 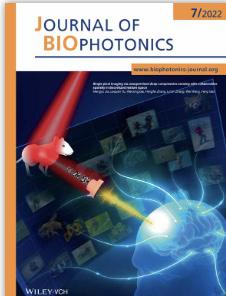 Objectives: To evaluate biocorrosion and eccentric occlusal loading interplay in marginal quality of cervical restorations. Methods: Cervical wedge-shaped cavities were prepared in extracted premolars and restored with a composite. Premolars underwent either an erosive challenge (E: 1% citric acid/10 min), eccentric occlusal loading (EOL: 150 N/2.5 Hz/10 6 cycles), E before EOL (E + EOL), E intermediate to EOL (EOL/E/EOL), E after EOL (EOL + E), or no E or EOL (C: control). Marginal quality was analyzed based on a series of Optical Coherence Tomography images. Each of the margins was assigned a gap score (0, 1, 2, or 3) and measurement (μm). For each margin, scores data were analyzed with Kruskall Wallis and Dunn tests, and μm data, with Kruskall Wallis. Overall and for each group, the different margins were compared using Wilcoxon signed-rank test, and the correlation between scores and μm, Spearman's correlation coefficient (α = 0.05). Results: E and EOL, even if as...

In vivo evaluation of endometrium through dual-modality intrauterine endoscopy 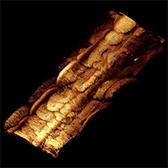 Female infertilities are highly associated with poor endometrial receptivity. A receptive endometrium is generally characterized by the normal uterine cavity, intact endometrial surface, appropriate endometrial thickness, and echo pattern. Acquiring comprehensive structural information is the prerequisite of endometrium assessment, which is beyond the ability of any single-modality imaging method. In this paper, we introduce a custom-made intrauterine dual-modality (OCT/ultrasound) endoscopic imaging system and achieve in vivo imaging of rabbit uteri, for the first time to our knowledge. The endometrial features of the injured uteri in both ultrasonic and OCT images are consistent with their corresponding pathology. The quantified parameters, including uterine thickness and endometrial surface roughness, show the correlation with the endometrial injury degree but with poor performance for injury classification. The combination of these parameters was proved to assess the degrees of ... 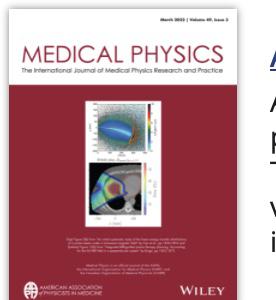 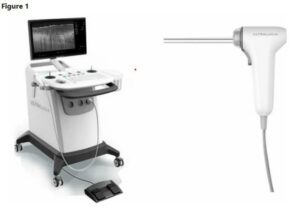 In this study, a prospective study was conducted by using optical coherence tomography (OCT) in the in vivo detection of vulvar diseases. The clinical efficacy of the OCT we investigated in the detection of vulvar diseases, and the characteristics of the OCT images were defined. Overall, this study recruited 63 patients undergoing the colposcopy for vulvar lesions in three Chinese hospitals from December 20th, 2018 and September 24th, 2019. The colposcopy and the OCT examination were performed successively, and the OCT images were compared with the relevant tissue sections to characterize different lesions. The OCT diagnoses where categorized into 7 types, including normal and inflammatory vulva, condyloma acuminata, papilloma, lichen sclerosus, atrophic sclerosing lichen, fibrous epithelial polyp as well as cysts. The structural characteristics of the vulva tissue can be clearly observed in the OCT image, which are consistent with the characteristics of the tissue section. Compared... 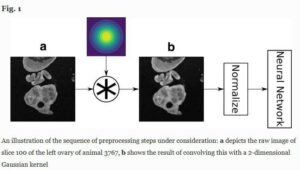 Ovarian cancer has the sixth-largest fatality rate in the United States among all cancers. A non-surgical assay capable of detecting ovarian cancer with acceptable sensitivity and specificity has yet to be developed. However, such a discovery would profoundly impact the pace of the treatment and improvement to patients’ quality of life. Achieving such a solution requires high-quality imaging, image processing, and machine learning to support an acceptably robust automated diagnosis. In this work, we propose an automated framework that learns to identify ovarian cancer in transgenic mice from optical coherence tomography (OCT) recordings. Classification is accomplished using a neural network that perceives spatially ordered sequences of tomograms. We present three neural network-based approaches, namely a VGG-supported feed-forward network, a 3D convolutional neural network, and a convolutional LSTM (Long Short-Term Memory) network. Our experimental results show that our models... 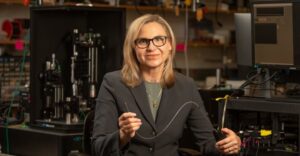 Due to a lack of effective screening and diagnostic tools, more than three-fourths of ovarian cancer cases are not found until the cancer is in an advanced stage. As a result, fewer than half of all women with ovarian cancer survive more than five years after diagnosis. Jennifer Barton , director of the University of Arizona BIO5 Institute and Thomas R. Brown Distinguished Chair in Biomedical Engineering , has spent years developing a device small enough to image the fallopian tubes – narrow ducts connecting the uterus to the ovaries – and search for signs of early-stage cancer. Dr. John Heusinkveld has now used the new imaging device in study participants for the first time, as part of a pilot human trial. For the pilot human trial, Heusinkveld is using the falloposcope device to image the fallopian tubes of volunteers who are already having their tubes removed for reasons other than cancer. This will allow researchers not only to test the effectiveness of the device, b... 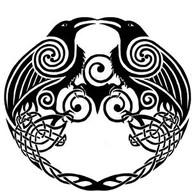 Glannaventa Receives a 2021 NIH NCI SBIR Grant for $399,331 for development of an out-patient screening procedure for high-grade serous ovarian cancer enabled by Optical Coherence Tomography. The principal investigator is John Black. Below is a summary of the proposed work. This year, over 22,000 women in the U.S. will be diagnosed with ovarian cancer (OvCa), and ~14,000 will die from this disease. Approximately 9,000 of these deaths occur from high-grade serous epithelial cancer (HGSC) primarily because of our inability to detect the disease in its early stages. OvCa accounts for 2.5% of all female cancer cases but 5% of deaths, resulting from the low HGSC survival rate as the majority of women are diagnosed with advanced disease that becomes resistant to chemotherapy. It is well known that timely detection of early-stage disease could improve 5-year survival rates to >90%, with a significant associated reduction in morbidity and mortality. Unfortunately, the biology, genetics,... 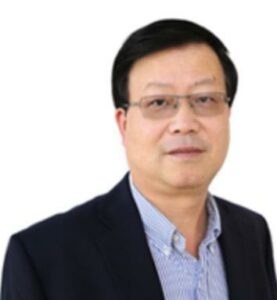 University of California at Irvine Receives a 2021 NIH Grant for $1,946,945 for Continuous Monitoring and Management of Vaginal Health via Multifunctional OCT/OCTA Endoscopy. The principal investigator is Zhongping Chen. Below is a summary of the proposed work. Genitourinary Syndrome of Menopause (GSM) affects up to 50% of women and negatively affects their quality of life with regard to general health and sexual function. Hormone therapy is the most commonly performed procedure to supplement the natural estrogen, but health risk associated with long-term therapy exists. Recently, an alternative therapy has been proposed using fractional CO2 micro- ablation that may benefit patients that cannot receive hormone therapies. Although laser micro- ablation showed a clear benefit in dermatology, it remains controversial in female pelvic medicine. The main problem is that, without a clear indication to routinely perform an invasive biopsy for benign genitourinary changes, the pathophysiolo...
1 - 15 of 140 // 1 2 3 … 10 Next