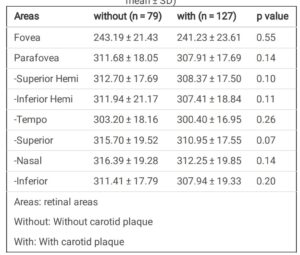 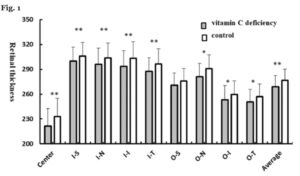 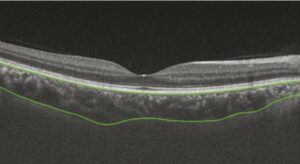 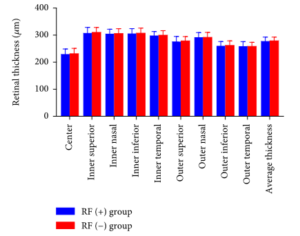 Purpose . Researches have confirmed that the retinal and choroidal thickness in patients with autoimmune disease-associated uveitis displays significant changes. However, the relationships between rheumatoid factor (RF) and thickness of the retina and choroid in individuals without ocular manifestations remain unclear. The aim of this study is to assess the associations of RF with retinal and choroidal thickness. Methods . The individuals enrolled in the cross-sectional research received full ocular examinations. The participants were classified as the RF (+) group ( IU/ml) and the RF (−) group ( IU/ml) according to the serum RF titers. The thickness of the retina and choroid was measured by swept-source optical coherence tomography (SS-OCT). Results . The study covered 65 right eyes of 65 individuals that are RF-positive and 130 right eyes of 130 age- and sex-matched individuals that are RF-negative. The RF (+) group showed decreased choroidal thickness that ach... 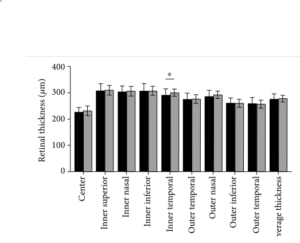 Purpose . To evaluate the relationships between C-reactive protein (CRP) and retinal and choroidal thickness by swept-source optical coherence tomography (SS-OCT). Methods . The participants included in the prospective cross-sectional study underwent a comprehensive ophthalmic examination. Based on the CRP values, the subjects were divided into the CRP (+) group ( mg/L) and the CRP (−) group ( mg/L). The retinal and choroidal thickness was compared between the two groups. Results . This study enrolled 43 right eyes of 43 subjects from the CRP (+) group and 86 right eyes of 86 gender- and age-match subjects from the CRP (−) group. The choroidal thickness in the CRP (+) group was thinner than that in the CRP (−) group except for the outer nasal sector of the Early Treatment Diabetic Retinopathy Study (ETDRS) grid. However, the retinal thickness only in the inner temporal sector showed a significant difference. According to Pearson’s correlation an...