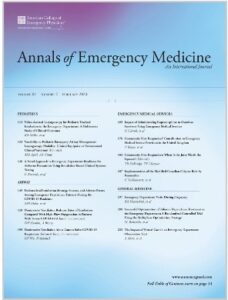 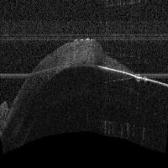 Optical coherence tomography (OCT) may be useful for guidance of ocular microsurgeries such as deep anterior lamellar keratoplasty (DALK), a form of corneal transplantation that requires delicate insertion of a needle into the stroma to approximately 90% of the corneal thickness. However, visualization of the true shape of the cornea and the surgical tool during surgery is impaired in raw OCT volumes due to both light refraction at the corneal boundaries, as well as geometrical optical path length distortion due to the group velocity of broadband OCT light in tissue. Therefore, uncorrected B-scans or volumes may not provide an accurate visualization suitable for reliable surgical guidance. In this article, we introduce a method to correct for both refraction and optical path length distortion in 3D in order to reconstruct corrected OCT B-scans in both natural corneas and corneas deformed by needle insertion. We delineate the separate roles of phase and group index in OCT image disto... 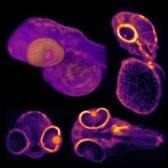 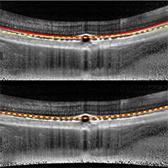 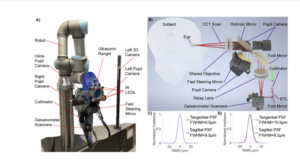 Optical coherence tomography (OCT) has revolutionized diagnostics in ophthalmology. However, OCT requires a trained operator and patient cooperation to carefully align a scanner with the subject’s eye and orient it in such a way that it images a desired region of interest at the retina. With the goal of automating this process of orienting and aligning the scanner, we developed a robot-mounted OCT scanner that automatically aligned with the pupil while matching its optical axis with the target region of interest at the retina. The system used two 3D cameras for face tracking and three high-resolution 2D cameras for pupil and gaze tracking. The tracking software identified 5 degrees of freedom for robot alignment and ray aiming through the ocular pupil: 3 degrees of translation (x, y, z) and 2 degrees of orientation ( yaw , pitch ). We evaluated the accuracy, precision, and range of our tracking system and demonstrated imaging performance on free-standing human subjects. Our re...

Ocular deformation may be associated with biomechanical alterations in the structures of the eye, especially the cornea and sclera in conditions such as keratoconus, congenital glaucoma, and pathological myopia. Here, we propose a method to estimate ocular shape using an ultra-wide field MHz swept-source optical coherence tomography (SS-OCT) with a Fourier Domain Mode-Locked (FDML) laser and distortion correction of the images. The ocular biometrics for distortion correction was collected by an IOLMaster 700, and localized Gaussian curvature was proposed to quantify the ocular curvature covering a field-of-view up to 65°×62°. We achieved repeatable curvature shape measurements (intraclass coefficient = 0.88 ± 0.06) and demonstrated its applicability in a pilot study with individuals (N = 11) with various degrees of myopia. ( Read Full Article ) 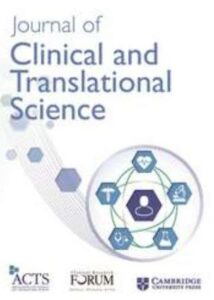 An abstract is not available ( Read Full Article ) 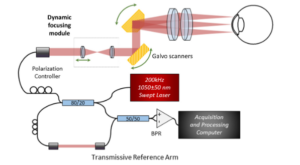 Anterior uveitis is the most common form of intraocular inflammation, and one of its main signs is the presence of white blood cells (WBCs) in the anterior chamber (AC). Clinically, the true composition of cells can currently only be obtained using AC paracentesis, an invasive procedure to obtain AC fluid requiring needle insertion into the AC. We previously developed a spectroscopic optical coherence tomography (SOCT) analysis method to differentiate between populations of RBCs and subtypes of WBCs, including granulocytes, lymphocytes and monocytes, both in vitro and in ACs of excised porcine eyes. We have shown that different types of WBCs have distinct characteristic size distributions, extracted from the backscattered reflectance spectrum of individual cells using Mie theory. Here, we further develop our method to estimate the composition of blood cell mixtures, both in vitro and in vivo. To do so, we estimate the size distribution of unknown cell mixtures by fitting the distrib... 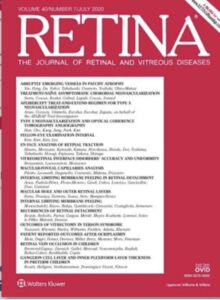 The majority of the eye's refractive power lies in the cornea, and pathological changes in its shape can affect vision. Small animal models offer an unparalleled degree of control over genetic and environmental factors that can help elucidate mechanisms of diseases affecting corneal shape. However, there is not currently a method to characterize the corneal shape of small animal eyes with topography or pachymetry maps, as is done clinically for humans. We bridge this gap by demonstrating methods using optical coherence tomography (OCT) to generate the first topography and pachymetry (thickness) maps of mouse corneas. Radii of curvature acquired using OCT were validated using calibration spheres as well as in vivo mouse corneas with a mouse keratometer. The resulting topography and pachymetry maps are analogous to those used diagnostically in clinic and potentially allow for characterization of genetically modified mice that replicate key features of human corneal disease. ( Read...

There is potential clinical significance in identifying cellular responses in the anterior chamber (AC) of the eye, which can indicate hyphema (an accumulation of red blood cells [RBCs]) or aberrant intraocular inflammation (an accumulation of white blood cells [WBCs]). In this work, we developed a spectroscopic OCT analysis method to differentiate between populations of RBCs and subtypes of WBCs, including granulocytes, lymphocytes and monocytes, both in vitro and in ACs of porcine eyes. We developed an algorithm to track single cells within OCT data sets, and extracted the backscatter reflectance spectrum of each single cell from the detected interferograms using the short-time Fourier transform (STFT). A look-up table of Mie back-scattering spectra was generated and used to correlate the backscatter spectral features of single cells to their characteristic sizes. The extracted size distributions based on the best Mie spectra fit were significantly different between each cell type... 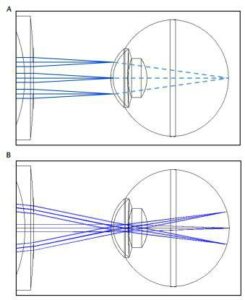 Contemporary anterior segment and retinal optical coherence tomography (OCT) systems only image their particular designated region of the eye and cannot image both areas of the eye at once. This separation is due to the differences in optical system design needed to properly image the front or back of the eye and also due to limitations in the imaging depth of current commercial OCT systems. More recently, research and commercial OCT systems capable of "whole-eye" imaging have been described. These whole-eye OCT systems enable applications such as ocular biometry for cataract surgery, ocular shape analysis for myopia, and others. Further, these whole-eye OCT systems allow us to image the eye as an integrated whole rather than as separate, independent divisions. ( Read Full Article )

Purpose : We advance studies of subretinal treatments by developing a microscope-integrated optical coherence tomography (MIOCT) image-based method for measuring the volume of therapeutics delivered into the subretinal space. Methods : A MIOCT image-based volume measurement method was developed and assessed for accuracy and reproducibility by imaging an object of known size in model eyes. This method then was applied to subretinal blebs created by injection of diluted triamcinolone. Bleb volumes obtained from MIOCT were compared to the intended injection volume and the surgeon's estimation of leakage. Results : Validation of the image-based volume measurement method showed accuracy to ±1.0 μL (6.0% of measured volume) with no statistically significant variation under different imaging settings. When this method was applied to subretinal blebs, four of 11 blebs without surgeon-observed leakage yielded a mean volume of 32 ± 12.5 μL, in contrast to the intended 50 &...

There is great clinical importance in identifying cellular responses in the anterior chamber (AC) which can indicate signs of hyphema (an accumulation of red blood cells (RBCs)) or aberrant intraocular inflammation (an accumulation of white blood cells (WBCs)). These responses are difficult to diagnose and require specialized equipment such as ophthalmic microscopes and specialists trained in examining the eye. In this work, we applied spectroscopic OCT to differentiate between RBCs and subtypes of WBCs, including neutrophils, lymphocytes and monocytes, both in vitro and in ACs of porcine eyes. We located and tracked single cells in OCT volumetric images, and extracted the spectroscopic data of each cell from the detected interferograms using short-time Fourier Transform (STFT). A look-up table of Mie spectra was generated and used to correlate the spectroscopic data of single cells to their characteristic sizes. The accuracy of the method was first validated on 10um polystyrene mic...

Age-related macular degeneration (AMD) is a major cause of vision loss in the elderly. To better study the pathobiology of AMD, postmortem eyes offer an excellent opportunity to correlate optical coherence tomography (OCT) imaging characteristics with histopathology. However, postmortem eyes from autopsy present challenges to standard OCT imaging including opaque anterior segment structures and standard of care autopsy processing resulting in oblique views to the macula. To overcome these challenges, we report a custom periscope attached by a standard mount to an OCT sample arm and demonstrate high quality macular OCT acquisitions in autopsy-processed eyes. ( Read Full Article )
1 - 15 of 33 // 1 2 3 Next