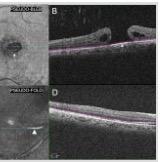 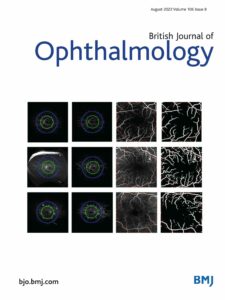 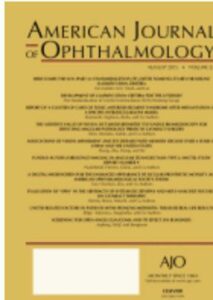 Purpose Suboptimal functional outcomes following rhegmatogenous retinal detachment (RRD) repair may be related to photoreceptor abnormalities including alterations of the ellipsoid zone (EZ) which may not be apparent on cross-sectional optical coherence tomography (OCT). This study assessed EZ recovery using en face OCT following RRD repair and its association with visual acuity. Design Post hoc analysis of a randomized controlled trial. Methods Patients with macula-off RRD were followed at 3, 6, 12 and 24 months post-operatively and annually thereafter. En face OCT of the EZ slab were analyzed. Hyporeflective areas were co-localized with EZ abnormalities on cross-sectional OCT B-Scans and measured by two masked graders. Primary outcome was change in area of EZ hyporeflectivity from 3 to 24 months and its association with ETDRS visual acuity recovery was also assessed. Results 271 images of 61 patients were assessed. Mean area of hyporeflectivity significantly decreased from 3 to 24...

Objectives  The recent development of handheld spectral-domain optical coherence tomography (HHSD-OCT) has enabled us to obtain high-resolution retinal scans of premature infants with retinopathy of prematurity (ROP). The purpose of this study is to document HHSD-OCT findings in laser-treated neonates with progressive ROP. Methods  This is a retrospective consecutive case series of 3 patients with progressive ROP despite laser photocoagulation. All patients were transferred from peripheral neonatal intensive care units (NICUs) to the Children's Hospital Los Angeles. All patients had a complete ocular examination, fundus photography, fluorescein angiography, and HHSD-OCT. Results  All 3 patients had active progressive ROP despite prior laser photocoagulation. Of the 6 eyes, 1 was excluded from the study because it had an exudative retinal detachment following laser photocoagulation. Retinal detachment was not detected on clinical examination in the 5 remaining eyes, although there wa...
1 - 4 of 4 //